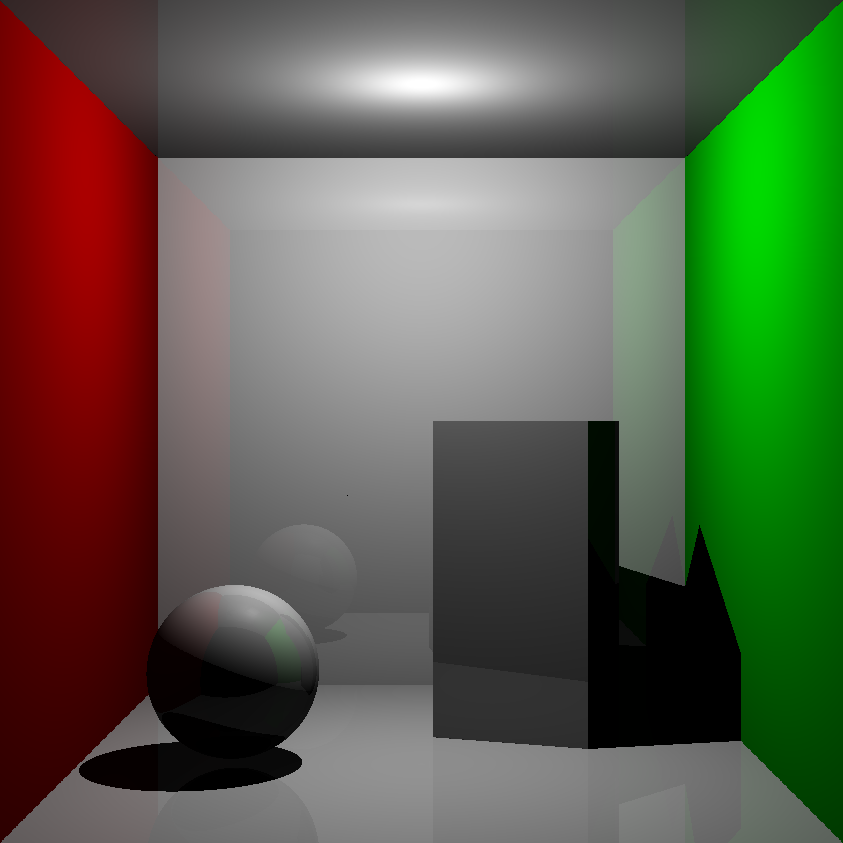 In computer graphics, we have long used the technique called “rasterization” to display a 3D scene as a 2D image. In the process, the triangles that represent the scene get projected on a plane, then the “shader” determines the color of each pixel within the triangle based on the triangle’s orientation, the light sources, and the material of the objects. In the first part of the project, you will learn how to implement a basic shader based on the Blinn-Phong Model.

Although rasterization can render a scene in real time, it could not handle translucent objects, refractions, and reflection to produce photorealistic images. In the second part of the project, you will be implementing another rendering technique called “ray tracing”, which can handle complex phenomena such as refraction, inter-reflections, caustics, and soft shadows. The only downside to this method is that it is significantly slower to compute.

To get started, clone the tracer-skeleton. The skeleton code has comments marked with // TODO denoting where to write your code. You are encouraged to read through this document and review the Shading and Ray Tracing lectures carefully. The sample solution is only for the ray tracing part and only shows the debug rays.

A shader is a program that controls how each point on the screen appears as a function of viewpoint, lighting, material properties, and other factors. Vertex shaders are run once for each vertex in your model. They transform it into device space (by applying the model view and projection matrices), and determine what each vertex’s properties are. Fragment (or pixel) shaders are run once for every pixel to determine its color. In this project, specifically, we will implement the Blinn-Phong shader. The equation is shown here:

Modern shaders and renderers support different types of light sources such as point light, directional light, and area light, but we will only focus on point light. Point light emits light from a single point in space, and its intensity is proportional to \(1/r^2\) where \(r\) is the distance from the light. In this implementation, we use set the distance attenuation to \(1 / (1 + r^2)\) to avoid values greater than 1.

There are 2 files that you need to look at:

Shader files are written in HLSL (High-level shader language) which is quite similar to C/C#. In the function MyFragmentProgram, we already implemented the emissive and diffuse component to demonstrate how we incorporate Unity’s built-in shader variables that you are probably going to use in your code.

To see how the diffuse shader looks, go to the scene TestBlinnPhong, and observe how objects look under a point light. You will probably notice that there is a harsh falloff on the objects since the “attenuation” variable is not properly calculated.

You are free to experiment with this scene. Here are some resources if you want to explore more about Unity’s shaders:

It is recommended that you open the scene TestBlinnPhong where you can play around and add objects as you need. To create additional meshes and apply the Blinn-Phong shader, select the material → Shader → Custom → Lighting → BlinnPhong. You must not modify any other scenes except for TestBlinnPhong. Other scenes must be kept static for your benefit of matching the solution.

Whenever you edit the code in BlinnPhong.cginc, Unity will automatically update the scene from the Scene tab (left), meaning that you don’t have to press Play to see the result on the Game tab (right).

It is recommended that you finish implementing the Blinn-Phong shader before moving on to Ray Tracing, but the completion of BlinnPhong.cginc is not required for Ray Tracing to work properly.

The ray tracer iterates through every pixel in the image, traces a ray from the camera through that point on the image plane, and calculates what color intensity to assign to that pixel based on the interaction of that ray (and recursively spanned rays) with the scene.

The skeleton code goes through several functions to do this, but most of the action occurs in the TraceRay() function. The function takes a ray as an input and determines the color that should be projected back to whatever that casts the ray. The function takes four arguments (two are used for debugging):

The following diagram represents the flow of the ray tracing program:

You will need to fill out the TODOs in the TraceRay() function.

There are three different components that contribute to the color of a surface:

The default value for ambient light is black. You can modify this value as you wish in your own scene, but for now, you should not modify this setting in the sample scenes in Assets/Scene/TestRayTracing which will be used to test your program’s correctness.

This section provides some explanation on how ray-object intersections are handled. You don’t need to implement anything here.

In TraceRay(), intersections are checked in the bvh.IntersectBoundingBox(Ray r, out Intersection hit) function which takes in a ray r and returns a boolean value of whether there is an intersection. The function also returns the intersection data through a pass by reference parameter hit for you to use. (Check bvh.cs in Assets\Scripts\Utilities if you want to know more)

The IntersectBoundingBox simply checks if a ray intersects with some bounding box. In our program, objects are divided and grouped into some bounding boxes based on their proximity. This is simply an acceleration structure which attempts to reduce the number of ray-object intersection checks as much as possible. The real ray-object intersection tests occur in the IntersectionLocal in the Utilities class where a ray is checked if it intersects with a sphere or a triangle face and returns the intersection data. The implementation details for ray-sphere and ray-triangle intersection check is from the Marschner Shirley Handout 4.4.1 and 4.4.2.

Go to the Tracer/Assets/Samples/ folder to see the solution’s rendered images.

Once you implement the requirements, you will be able to verify your implementation. Go to the Assets/Scenes/TestRayTracing folder and open the pre-made scenes and hit Play. After ray tracing a scene, the program will save a picture of the rendered scene into the Tracer/Assets/Students/. You will be notified by the text “Image Saved” on the screen.

Go to the Assets/Scenes/ImageComparison scene and click Play. The program will output a percentage for each scene. This percentage is how much your rendered scene matches the solution’s.

Turning on “Diff Overlay” shows the visual difference between the Sample image and the Student image. Any differences will be marked with red.

Here is what it looks like when “Diff Overlay” is off.

Check the Console for reasons that your scene may fail. Don’t worry if your solution doesn’t give exactly the same output (rounding errors, among other things, are a fact of life). Getting > 95% correct makes you pass a scene. However, if there is a noticeable pattern in the errors, then that definitely means something is wrong! This tool is only to get an idea of where to look for problems.

You will probably spend the most of the time with the scripts in the Scripts/RayTracing folder, but you only need to edit the file RayTracer.cs. The Utilities folder, which you should not modify, contains the grade checker (ImageComparison.cs), acceleration structure for intersection calculations (BVH.cs) , and some helpful imported libraries.

Because out ray tracer can be hard to debug (“why is my image blank??”), we provide a visual debugging tool that helps you visualize which rays you’re tracing for each pixel. To use it, simply click Play for your scene, then click on a pixel of a rendered scene on the Game tab on the right, and check out how the ray traverses in space in the Scene tab on the left. Here is an example:

In this example, the user clicks on a reflection of the cylinder on the right pane (white mouse arrow), which results in these rays showing up in the left pane.

Make a folder and rename it to your netid. In the folder, put the following items:

Zip the folder and submit the file on Canvas. The zip file should contain exactly one level of folder nesting. (Once we open up your zip file, we should see a single folder named your netid, and we should see the listed items in the folder).