Modeler is a program that views a 3d hierarchical model, and lets you manipulate joint angles. It also allows you to load different shaders to shade the 3d model, and manipulate the lighting conditions. Modeler is the basis for the Animator program in Project 4, which just extends the functionality of it.

This project is divided into four parts that span the concepts of creating 3d surfaces, surface normals, texturemapping, hierarchical modeling, and shading. There is one requirement for each part:

First, check out these amazing shaders for inspiration! Head on over to the GLSL tutorials for a really good walkthrough of how to get started on shaders.

Before creating your hierarchical model, you might want to take a look at the matrices section on the help page. The link there also contains a thorough explanation of OpenGL matrices.

In OpenGL, all scenes are made of primitives like points, lines, triangles and quadrilaterals. In this project, you will implement a surface of revolution using glDrawElements with GL_TRIANGLES to make a 3D surfaces. For each mesh, you send a list of vertices (the points that make up the primitive) with normals and texture coordinates, and an array indices specifying triangles. A simple example can be found in the help slides (link is on the right).

Surface normals are perpendicular to the plane that's tangent to a surface at a given vertex. Surface normals are used for lighting calculations, because they help determine how light reflects off of a surface. Each normal is sent by calling glNormal3f(x, y, z) before the call to glVertex3f(), much like texture mapping.

In OpenGL, we often want to approximate smooth shapes like spheres and cylinders using only triangles and quadrilaterals. One way to make the lighting look smooth is to use the normals from the shape we're trying to approximate, rather than just making them perpendicular to the polygons we draw. This means we calculate the normals for each vertex (per-vertex normals), rather than each face (per-face) normals. Shaders allow us to get even smoother lighting, calculating the normals at each pixel. You can compare these methods below: 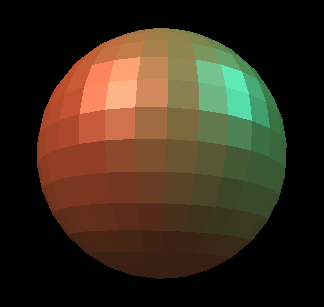 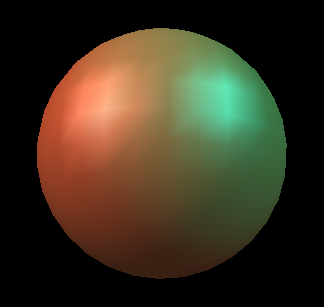 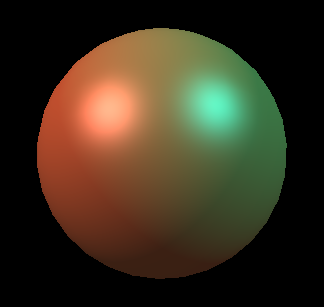 Texture mapping allows you to "wrap" images around your model by mapping points on an image (called a texture) to vertices on your model. For each vertex, you indicate the coordinate that vertex should apply to, using the command glTexCoord2f(s, t), where s is the X-coordinate and t is the Y-coordinate of the point on the texture that should line up with the vertex. You call glTexCoord2f() right before the vertex you want to apply it to:

Using Textures In Your Model

When you want to use a texture, you'll need to do the following:

A hierarchical model is a way of grouping together shapes and attributes to form a complex object. Parts of the object are positioned relative to each other instead of the world. Think of each object as a tree, with nodes decreasing in complexity as you move from root to leaf. Each node can be treated as a single object, so that when you modify a node you end up modifying all its children together. Hierarchical modeling is a very common way to structure 3D scenes and objects, and is found in many other contexts. If hierarchical modeling is unclear to you, you are encouraged to look at the Hierarchical Modeling lecture notes.

You will want to make a model to draw your character, by extending the Model class in model.h:

The easiest way to get started is to just modify the existing Scene class in sample.cpp. It extends Model, and in the main() method at the bottom, an instance of it is given to ModelerUserInterface to be displayed onscreen. Later on, you can create your own Model subclass and add it to the Scene class, much like the PointLight and DirectionalLight Models are added. See sample.cpp for details.

Adding Properties To Your Model

A property is an aspect of your model that the user can control. Modeler represents different types of properties with Property classes in model.h:

To add a property to your model class, do the following:

Now, when you open Modeler, a control for your property appears on the left panel.

For further details on each property class, look in model.h. To see how they are added to models, look at the skeleton code's sample model in sample.cpp.

Warning: If you try to set the value of a property of your model by calling setValue(), setRed(), etc., the slider, color picker, or checkbox corresponding to that property will not be updated to show that property's new value. This problem is an oversight in the design of the new Modeler, but will not prevent you from completing the project requirements. If you find yourself needing to set your model's properties, consult your TA's, because you might not be using the Model class the way it was intended to be used.

The graphics primitives you have (box, sphere, and cylinder) only accept parameters that define their dimensions. That means you can draw a box, sphere, or cylinder of any size, but it will always be at the origin with the same orientation. What if you want to move it somewhere else, or rotate it to a different orientation -- and you can't edit the primitive's drawing code?

In OpenGL, every vertex is multipled by the modelview matrix, then by the projection matrix:

If you called glTranslatef(1, 0, 0), then called glutSolidSphere(1, divisions, divisions), the sphere would be drawn centered around (1, 0, 0) because all of its vertices had 1 added to their X-coordinates. Each transformation has the effect of creating a "model space" with its own origin and axes. The sphere was drawn at the origin of a model space created by glTranslatef(1, 0, 0).

Once you have applied a transformation to the modelview matrix, it will be applied to every point sent to the graphics card forever! To undo the transformation, you need to remember the matrix's contents.

Make sure you match each glPushMatrix() with a corresponding glPopMatrix(), so that your modelview matrix is returned to its original state. This makes it easy to "nest" your transformations:

A shader is a program that controls the behavior of a piece of the graphics pipeline on your graphics card.

Shaders determine how the scene lighting affects the coloring of 3D surfaces. In OpenGL, there are two basic kinds of lights:

Tips for Using the Sample Shaders

These are additional shader ideas that you can create. You are required to create another shader(s) worth at least 3 whistles (or 1.5 bells). Additional bells or whistles are extra credit.

Using Shaders In Your Model

Shader files are loaded, compiled, and linked by ShaderProgram objects. If you want to add a shader:

Tip: If you have an error in your shader code, you do not have to restart modeler. Instead, fix your shader, then go to File->Reload Textures And Shaders.

Important: Like the rest of your Modeler binary, your shaders must work on the lab machines. If your code complies with the GLSL standard, it should work fine. One way you can verify that your code is compliant with the GLSL standard is to install the GLSL Validator tool. A good alternative tool is the glslang reference compiler. However, please still test on the lab machines.

Make sure you include all of your shader files. The Point Light Blinn-Phong Shader files should be named shader.frag and shader.vert so we can load them into the sample solution and compare. You may name your other shaders as you like, but we recommend that the fragment shaders end in .frag and the vertex shaders end in .vert.

Also make sure to copy over any textures or anything that is needed.

The modeler application itself is the artifact. To submit it, you will need to do a few special steps you didn't need to do for the binary submission. Basically, you'll encrypt your Modeler shaders and embed them in your program.

You will turn in one artifact per group

Note: If Modeler generates a broken shaders.cpp file, you can undo the change by replacing the contents of shaders.cpp with:

Bells and whistles are extra extensions that are not required, and will be worth extra credit. You are also encouraged to come up with your own extensions for the project. Run your ideas by the TAs or Instructor, and we'll let you know if you'll be awarded extra credit for them. If you do decide to do something out of the ordinary (that is not listed here), be sure to mention it in a readme.txt when you submit the project.

Disclaimer: please consult the course staff before spending any serious time on these. These are all quite difficult (I would say monstrous) and may qualify as impossible to finish in the given time. But they're cool.