We’ve probably all had this experience before: spending several hours writing some code, finally getting everything to compile, and then running the program; only to realize moments later that nothing works correctly, and spending another several hours disabling parts of the program to figure out what’s wrong. As it turns out, it takes a long time to figure out what’s wrong in a program, especially if we need to sequentially disable different components or write new mini-programs to check what our code is doing.

Instead of manually going through this process every time, it would be much easier to automate it—we’ll check our code by using more code! When we refer to testing, we’re referring to this process: we’re testing the correctness of our code.

You’ll see testing used extensively throughout both industry and the assignments in this course: all our assignments include some test code for the classes you’ll be implementing, our grading will similarly be automated using programmatic tests.

In particular, our tests focus on checking individual units of your code—usually individual instances of the class you write—to ensure that they behave as expected in each given scenario; this style of testing is called unit testing. Usually, each unit test follows a simple process:

A couple final notes and definitions:

Test case
A particular scenario to test; essentially corresponds to the “arrange” and “act” steps above (although it wouldn’t be incorrect to include the “assert” step, since a program should only ever have a single correct behavior for a given scenario).
Test suite
A collection of test cases. Usually, we collect all tests for a particular class in another class, so we can refer to that test class as the “test suite.”

JUnit is the unit testing framework we use in this class, and it’s also the most commonly used testing library for Java. Note that we’re using JUnit 5, which differs slightly from earlier versions of JUnit.

Line 4
Here, we import JUnit’s test annotation.
Line 9
All of our provided tests extend BaseTest, from our root src module. BaseTest implements WithAssertions from AssertJ, providing all our test classes with the default assertThat methods without need for imports.
Line 11
Notice that our test naming convention roughly corresponds to the 3 steps in unit testing: we have 3 parts separated by underscores, where the first and last describe the “act” and “assert” steps, while the middle describes the “arrange” step. Sometimes, we also break up the middle segment into multiple underscore-separated parts to make long names easier to read.
(Note that underscores in method names are allowed in test files, but will trigger Checkstyle errors in main source files.)
Line 21
This syntax may seem a little unusual. The assertThat call creates an object that stores output and provides many assertion methods.
The isEqualTo assertion method is the one you’ll see most often, and essentially just checks that output.equals(9) is true.
Line 34
AssertJ also provides specialized versions of assertThat with additional for particular types—in this case, a List. This assert is equivalent to the one above it, but also provides extra feedback if it fails: the error message will include not only the expected and actual sizes, but also the contents of the list (which will be truncated if the list is too large).

AssertJ similarly allows us to add our own assertThat implementations for custom data types; future assignments will include assertion classes for these in their test modules.

Now, lets try running some tests! Open the AssertJIntro test class in the root test module of our project. This file contains a few basic assertions showing off some capabilities of AssertJ. Notice that the file icon has a red-green diamond, indicating that IntelliJ recognizes it as a JUnit test suite. (The file icon may vary if you have a non-default IntelliJ theme applied.)

Since JUnit is such a popular testing framework, IntelliJ integrates support for running tests directly from its UI. You can run the unit tests by following the same procedure as we did for running code: click on the play button by the AssertJIntro class, and choose Run ‘AssertJIntro’. IntelliJ will compile your code and invoke JUnit, which will then scan through the test class and run all methods annotated with @Test. JUnit will report the test results back to IntelliJ in real time, which should get displayed in a tool window like this: 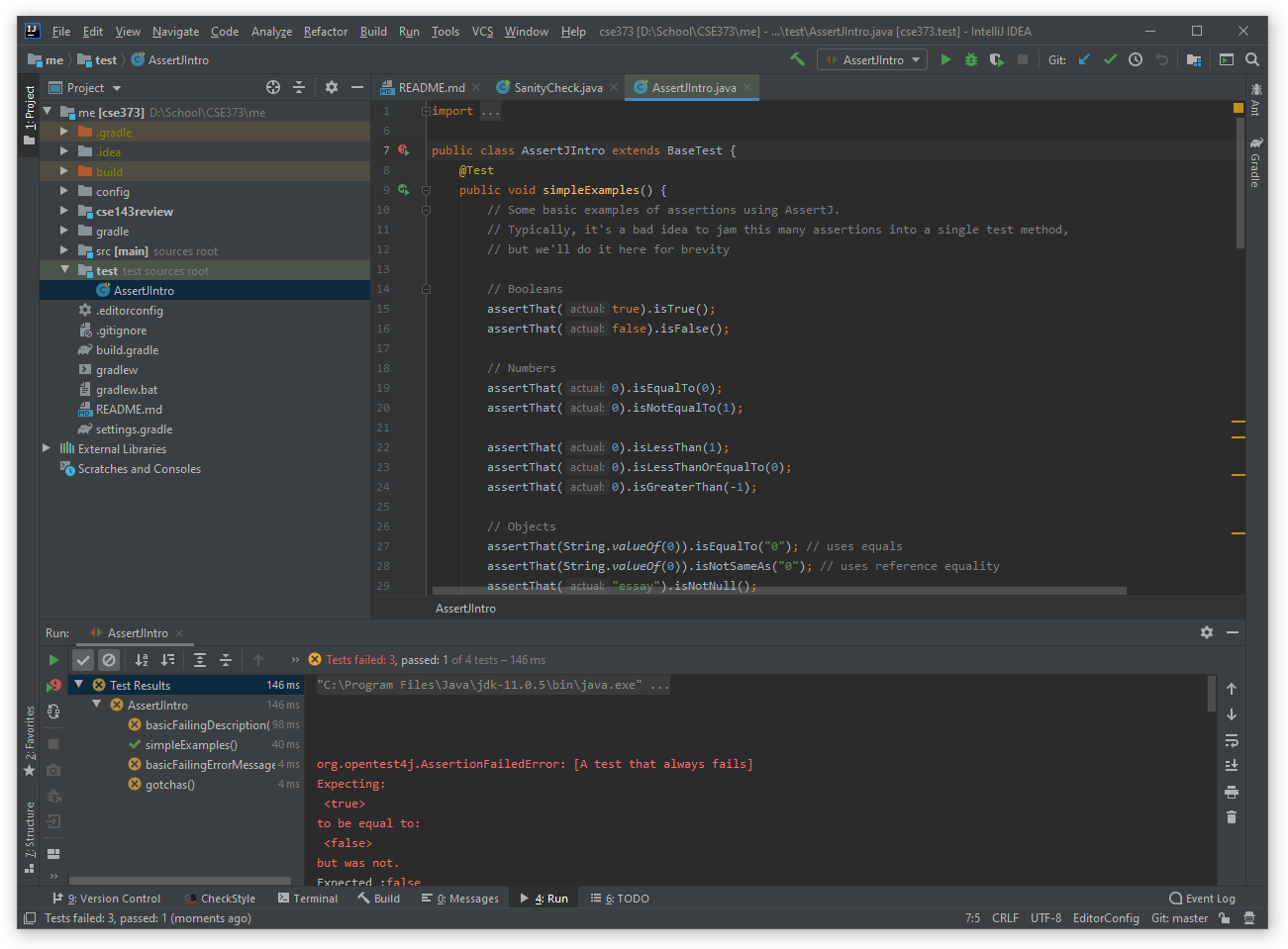 By default, IntelliJ may hide passing tests. You can change this by finding and clicking the Show Passed button (with the checkmark icon) in the top left of the tool window.

For this assignment, we’ve provided all the tests you’ll be graded on; find them in the cse143review.test module. There’s one test class for each class in problems, each filled with many unit tests for the methods you’ll be implementing.

You can try running these now, but they’ll all fail unless you’ve already started on the assignment. Instead, our main goal here is to introduce one last thing:

IntelliJ includes a built-in Java debugger, and we’ve enhanced it by installing the jGRASP plugin. We can run the program in debug mode by choosing Debug … instead of Run … when you click on a play icon. Like jGRASP, the IntelliJ debugger runs your program exactly like it would when running it normally, but it allows you to pause execution on breakpoints.

Let’s try this now: open datastructures.LinkedIntList and place a breakpoint on line 49 (the end of the array constructor). Afterwards, open LinkedIntListProblemsTests and start the debugger for reverse3_returnsCorrectList. 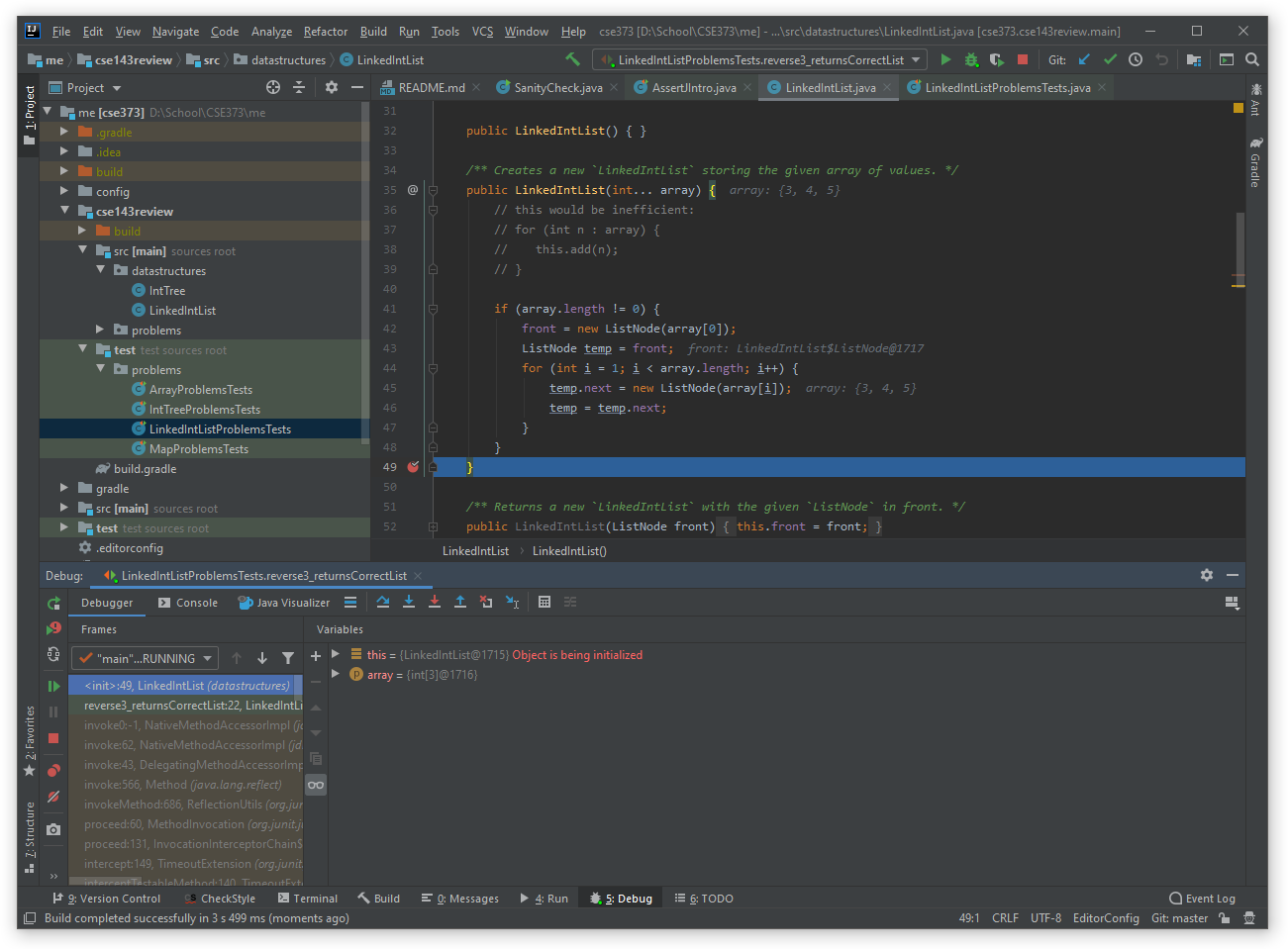 When the debugger stops at the specified breakpoint, the IntelliJ will bring up the Debug tool window. Here, you can see the paused state of the program. At the top of the Debug tool window are small icons for controlling the debugger, including the two most common operations to Step over and Step into the next statement. This is similar to how the jGRASP debugger works.

Thanks for entertaining all of these instructions. Now, we have all the tools we need to work on the main assignment.