Project 0 was focused on setup and review in a style vaguely reminiscent of CSE 143. The other assignments in this course will differ significantly in two ways:

When discussing with students other than your partner or when using online resources, always cite your collaborations as comments in your code, and otherwise follow the collaboration policies for projects.

Students not working with a partner may ignore this section.

There are multiple ways to work on the same codebase for these assignments, but here’s our recommended way:

Afterwards, both partners should have the chosen member’s repository cloned and should be able to push and pull from the chosen partner’s GitLab repository.

If your group decides to terminate the partnership after the assignment, the chosen member should revoke the other member’s access to their GitLab repository. (The other member should remember to pull one last time before this happens, so that they can manually copy the latest version of code into their own repo. Otherwise, the submitted code should still be accessible from Gradescope afterwards, but downloading the code this way may be more cumbersome than simply using Git.)

When working on code in your group, we strongly recommend against trying to divide-and-conquer the separate sections of assignments. Not all sections require the same amount of time and effort, and sections of an assignment often depend on previous sections, so splitting work this way will likely reduce your ability to understand the assignment rather than saving any time.

Instead, we recommend pair programming—this will ensure that both parties contribute equally and that both parties know what the code does and how to use it later. Additionally, discussing and writing code together will greatly improve your ability to plan and debug as you work.

If you have 5–10 minutes, take a look at this document about pair programming. It has several tips and motivations for pair programming, and even includes a recap at the end if you only have 1 minute to spare.

Due to the nature of an online quarter, you’ll need to pair program by screen-sharing through an online video calling application, such as Zoom.

If your group decides against pair programming for whatever reason and instead decides to work separately and simultaneously, you may need to pull and merge any new commits pushed to GitLab by your partner before you are able to push yourself.

However, if both sets of changes touch the same line, you’ll need to manually resolve the merge; this is called a merge conflict. Check out IntelliJ’s page on resolving merge conflicts; there’s a nifty window that will pop up that should help you resolve these relatively pain-free. Also feel free to come to office hours if you have trouble with this stuff.

If you aren’t careful in this process and cancel the merge (e.g., by clicking “Abort”), your repository may be left in a half-merged state, which will prevent most Git functionality from working properly. If anything goes wrong, we recommend coming in to office hours for help unless you’re confident in your Git knowledge—Googling and trying random things may create more issues, and these things tend to be difficult to debug via the discussion board.

To get the skeleton (starter) code for the assignment, first open IntelliJ. IntelliJ should automatically open your most-recently-used project, which will likely be your personal repository for this class.

In the menu bar, tap on the VCS item, then hover over Git and tap Pull… in the submenu.

In the window that appears, change the “Remote” to skeleton and select skeleton/master in the “Branches to merge”. If there are no branches to merge, try tapping the refresh icon next to the remote to update the list of branches. Then, tap the blue Pull button to get the project skeleton code.

If the deques folder that you just pulled isn’t bolded in the file explorer like cse143review, and you can’t seem to run any tests, it is likely that IntelliJ didn’t react to the change in time. We can manually ask it to reimport your project.

On the far right-hand side of IntelliJ, there’s a Gradle tool window that you can bring up. Click on “Reimport All Gradle Projects” (refresh button): 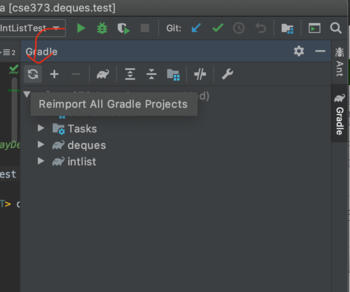 Most of the project assignments in this course share the same overall project structure: we’ll provide an interface or abstract class representing the main ADT or algorithm for the assignment, and the main assignment will involve implementing that in subclasses. In this assignment, the main interface is deques.Deque, and you’ll be working in the ArrayDeque and LinkedDeque classes in the same package.

Like in the previous assignment, changes to other classes or any new files you add will be ignored during grading, but you will often need to import or use these other classes in your implementation.

Assignments will also include client packages that act as users of the ADT/data structure you implement. In this assignment, the client is contained in the experiments package, which displays runtime plots of some provided experiment methods that use the deques you implement.

However, unlike the previous assignment, this and all future assignments will have extremely lax restrictions on classes you are allowed to import: in general, all imports are allowed except for classes that solve exactly the same problem presented in the assignment.

For example, for this assignment, the only restricted imports are for Java’s own deque and list implementations.

In order to share test code, our provided tests are often written in an abstract base test class, where each test method calls an abstract method to obtain the instance of the class to test. This way, we can create multiple subclasses of this base class, each overriding the abstract method to construct instances of the different ADT implementations.

As it turns out, this design pattern has dedicated support in IntelliJ, so attempting to run an abstract test class or a test method in one of them will cause IntelliJ to bring up a menu allowing you to select which implementation to run.

Your code for this and all future assignments will be graded based on some tests that are not provided with the skeleton code and run exclusively on Gradescope.

Usually, these grader-only tests either:

This second point is particularly important: if you find yourself wondering why your code fails a grader-only test, write a test to replicate the failure. Afterwards, you’ll be able to use the debugger to investigate the issue.

Finally, a note on the rate limits enforced by the Gradescope autograder: project 0 included nominal rate limiting, but from this project onward, the limiting will be stricter. The limiting is intended to discourage you from abusing the autograder system (e.g., by spamming submissions just to see feedback on grader-only tests, without thinking about changes you’re making), so most students working normally should never actually hit the limit.

To make the system easier to understand, we describe the limiting in terms of submission tokens: you’ll start each assignment with the maximum number of tokens for that assignment, and grading a submission consumes 1 token. Tokens will recharge some rate (depending on the assignment) as long as you’re under the max token count. If you make a submission with no tokens remaining, your submission will not be graded, and you’ll need to resubmit after you get a token back. (The submission feedback on Gradescope should include the time of your next token recharge.)

Since token recharging is time-based, it will always be to your benefit to start early on assignments.

The ability to store up multiple tokens should allow you to work more flexibly, so you can (and should) take breaks to eat/sleep/etc. without feeling like you’re “wasting” tokens. If you’re having a hard time writing or debugging some code, it will often be more efficient to take a break and return later with a fresh mindset, rather than repeatedly bashing your head against the problem.

The grader will (silently) refund your token if no sections score above 0 (e.g., all tests fail, or you have a compilation error).

For each assignment, the max token count is 6, and 1 token will recharge every 10 minutes.

Now, you should be ready for the programming portion of the assignment.