All the graded tests are provided to you in the cse143review.test module; run them to check your progress as you implement parts of the assignment. Review the testing page for more info.

For example, if a variable named array refers to the array:

On the other hand if the input array was:

Implement a method that returns a new int[] containing the input int[]‘s elements in reverse order. (The method should not modify the input array.)

The call to reverse(array) should return an array containing the values:

Implement a method that rotates the values in the input int[] to the right (i.e., forward in position) by one. Each element moves right by one, except the last element, which moves to the front.

The call of rotateRight(array) should modify it to store:

A subsequent call of rotateRight(array) would leave the array as follows:

These problems will involve writing methods that modify a LinkedIntList, taking the list as a parameter and directly modifying its public fields. For these problems, use the ListNode class defined in LinkedIntList.

Implement a method to change the following LinkedIntList (you may assume it has these exact 3 elements):

Into this sequence of ListNode objects:

This is intended to be a warm-up to the other LinkedIntList problems, so you don’t need to generalize your solution to work for different lists.

Implement a method that moves the first element of the input LinkedIntList to the back end of the list. Suppose a LinkedIntList variable named list stores the following elements from front (left) to back (right):

If you call firstToLast(list), the list would then store the elements in this order:

If the list is empty or has just one element, its contents should not be modified.

Implement a method which takes two LinkedIntLists as input and returns a new list containing all the items of the first followed by all the items of t he second. Don’t modify the input lists; use the new keyword to create new objects instead.

(You should be able to implement this method with linear runtime, i.e., without nested loops iterating through the inputs.)

These problems will involve modifying an IntTree, taking the tree as a parameter and directly modifying its public fields. For all these problems, use the IntTreeNode class defined in IntTree. 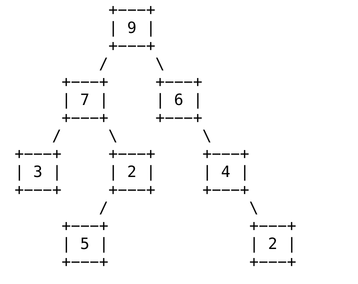 The sum would be computed as:

Implement a method that removes the leaf nodes from an IntTree. (Remember that a leaf node is one that has empty left and right subtrees.) If a variable tree refers to the first tree below, the removeLeaves(tree) should remove the four leaves from the tree (the nodes with data values 1, 4, 6, and 0) leaving the next tree below.

A second call on the method would eliminate the two leaves in this tree (the nodes with data values 3 and 8), shown in the third tree below. A third call would eliminate the one leaf with data value 9, and a fourth call would leave an empty tree because the previous tree was exactly one leaf node. If your method is called on an empty tree, the method does not change the tree because there are no nodes of any kind (leaf or not). 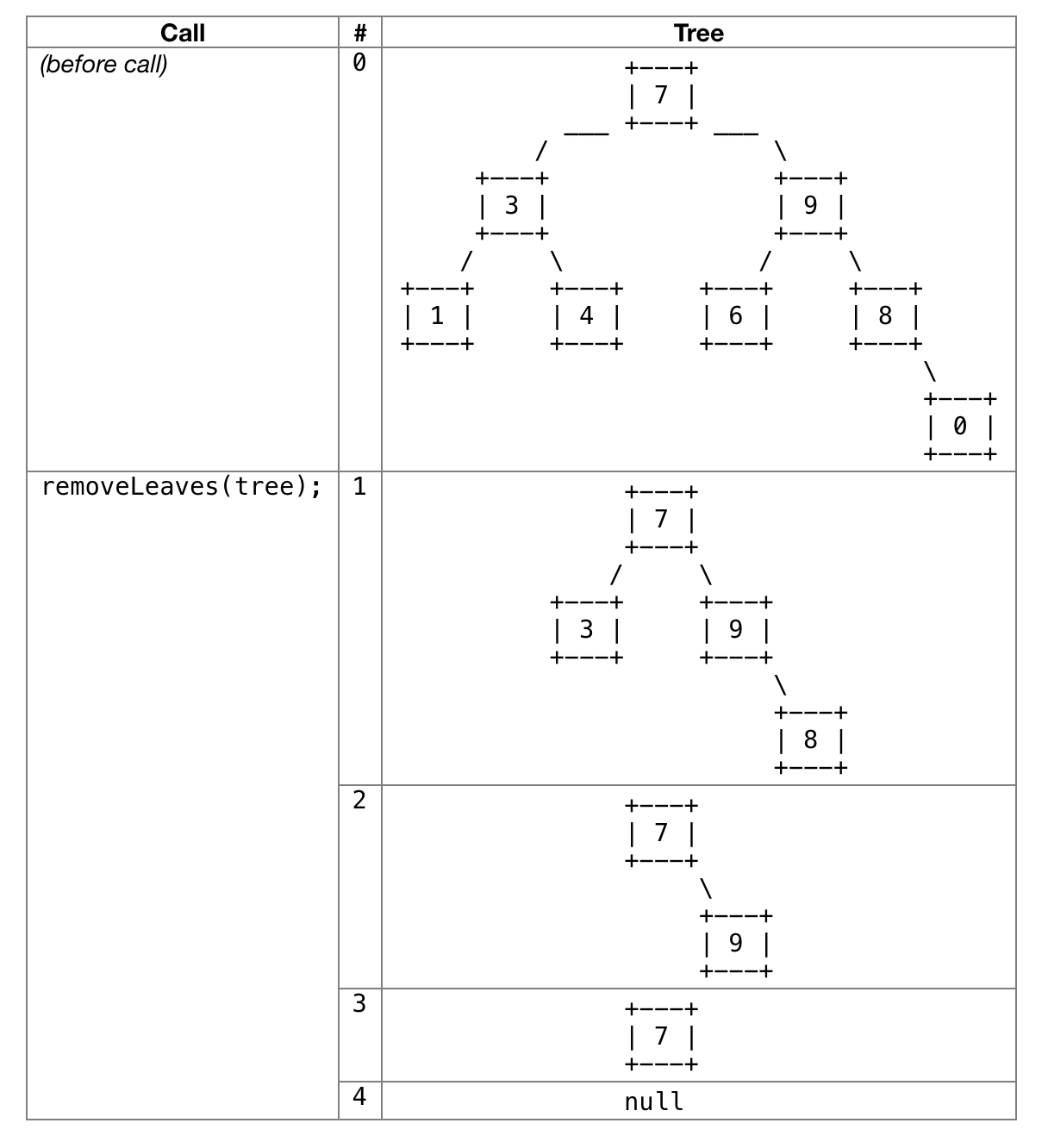 Implement a method that accepts parameters for an IntTree and minimum and maximum integer values, and removes from the tree any elements that are not within that range (inclusive). For this method, you should assume that your tree is a binary search tree (BST), so its elements are in valid BST order. Your method should maintain the BST ordering property of the tree. 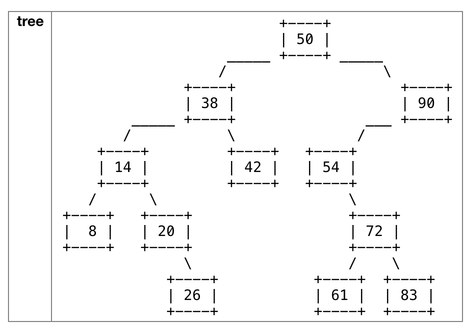 The table below shows what the state of the tree would be if various trim calls were made. The calls shown are separate; they are not a chain of sequential calls. You may assume that the minimum is less than or equal to the maximum.

Hint
The BST ordering property is important for solving this problem. If a node’s data value is too large or too small to fit within the range, this may also tell you something about whether that node’s left or right subtree elements can be within the range. Taking advantage of such information makes it more feasible to remove the correct nodes.

Each of these methods involves using Java Map objects (even if they don’t show up in the method signature.)

Implement a method that returns true if any string occurs at least 3 times in the input list, and false otherwise. Use a map as auxiliary storage. For example, consider the following list:

contains3 should return true given this input because “fun” shows up at least 3 times.

Implement a method that takes as input two maps from Strings to Integers and returns a new map whose contents are the intersection of the two. The intersection of two maps is defined here as the set of keys-value pairs that exist in both maps. If some key K maps to value V in both the first and second map, include it in your result. If K does not exist as a key in both maps, or if K does not map to the same value V in both maps, exclude that pair from your result.

Calling intersect(map1, map2) would return the following new map (the order of the key-value pairs does not matter):

Run the provided tests to check your work, as described in the testing page.

For this assignment, the tests on Gradescope are the same tests you can run in IntelliJ. In later assignments, we’ll be emphasizing testing as a skill, so some tests may only be available on Gradescope and you may be limited in the frequency of submissions you can make.

Visit the Commit & Submit page for instructions on saving your work and submitting it for grading.