The Run button works differently in this assessment than previous ones. Once you’ve implemented plotting functions in hw5.py with calls to plt.savefig(), you’ll see that Run generates some images showing the pixel differences between your plot and the expected plot highlighted in red. If the image is blank, then all the pixels match. A summary of the percentage of pixels that match will appear in the console.

“Food deserts” are neighborhoods where residents do not have nearby access to grocery stores offering affordable and nutritious food. In a June 2009 report to the US Congress, the US Department of Agriculture reports:

In this assessment, we’ll join 2010 US census data with food access data to investigate food deserts in Washington state. A census tract is defined as a food desert if enough people in the tract do not have nearby access to food sources.

The 2010 US census dataset is geospatial data in shapefile format. The only columns you need to understand are CTIDFP00, the census tract identifier, and geometry, the geometric shape of the tract.

The food access dataset is tabular data in CSV format. Each row in the dataset corresponds to a census tract for every state in the country. The data has many columns, but you only need to understand the following:

Due to the large datasets, the Mark automated checks can take a couple minutes to run. Some tests are hidden: they’ll display pass/fail information but not the exact details. If a hidden test is failing, write more of your own test cases.

Task: Write a function load_in_data that takes two parameters, the filename for the census dataset and the filename for the food access dataset. load_in_data should merge the two datasets on CTIDFP00 / CensusTract and return the result as a GeoDataFrame. Assume the census identifier column names exist, but don’t assume any other columns in the datasets. The resulting merged dataset might have missing data. For the provided datasets, the shape of the resulting GeoDataFrame is (1318, 30) rows by columns.

Task: Write a function percentage_food_data that takes the merged data and returns the percentage of census tracts in Washington for which we have food access data. The percentage should be a float between 0 and 100. Do not round the result.

For all plotting functions, don’t pass in bbox_inches="tight" to plt.savefig().

Task: Write a function plot_map that takes the merged data and plots the shapes of all the census tracts in Washington in a file map.png. Give the plot a title of “Washington State” with plt.title(). Do not customize this plot or overlay any data. The output should look like Washington state—make sure that it doesn’t have any holes! 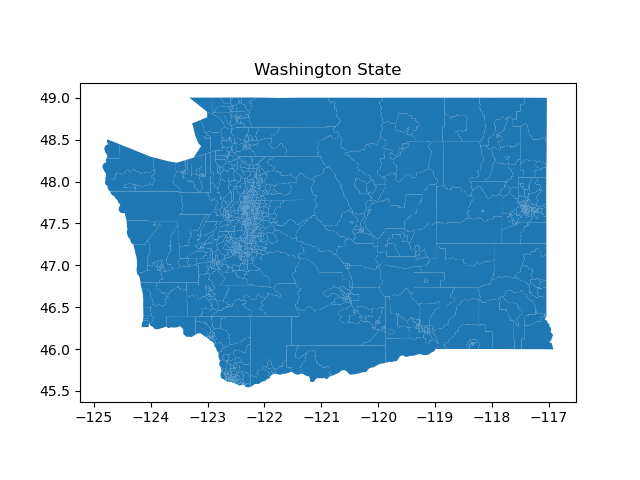 Layered plots can vary depending on the layering procedure, so it’s OK if your plots look as expected after checking the diff but match only 98 or 99%. 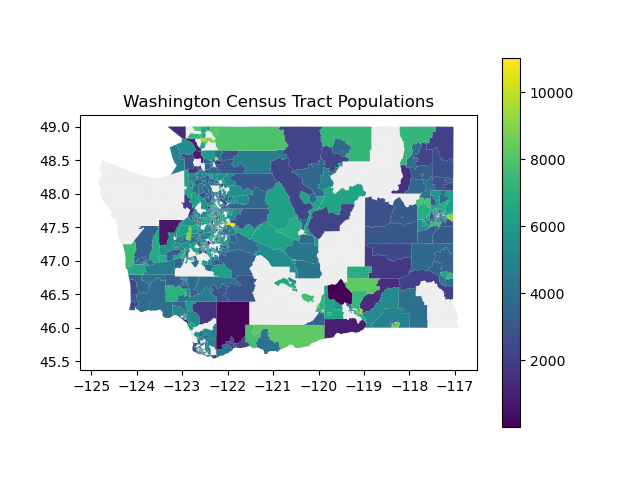 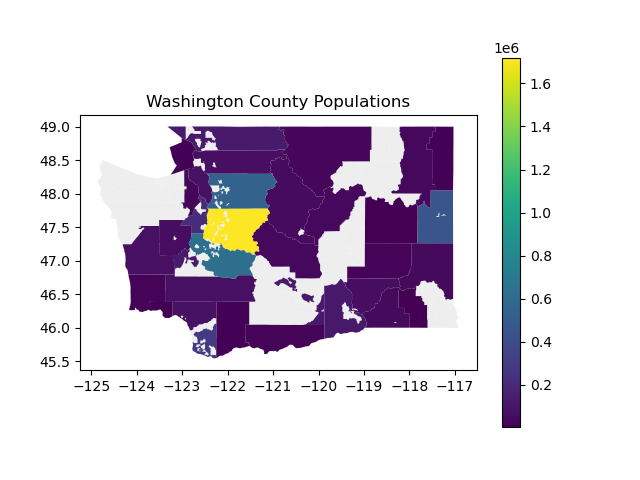 Task: Write a function plot_food_access_by_county that takes the merged data and produces 4 plots on the same figure showing information about food access across income level.

First, compute the ratio of people in each category.

Then, setup the figure using subplots.

Finally, plot the data on each ax1 ax2 ax3 ax4 subplot axis. For each subplot:

Save the figure to a file county_food_access.png. 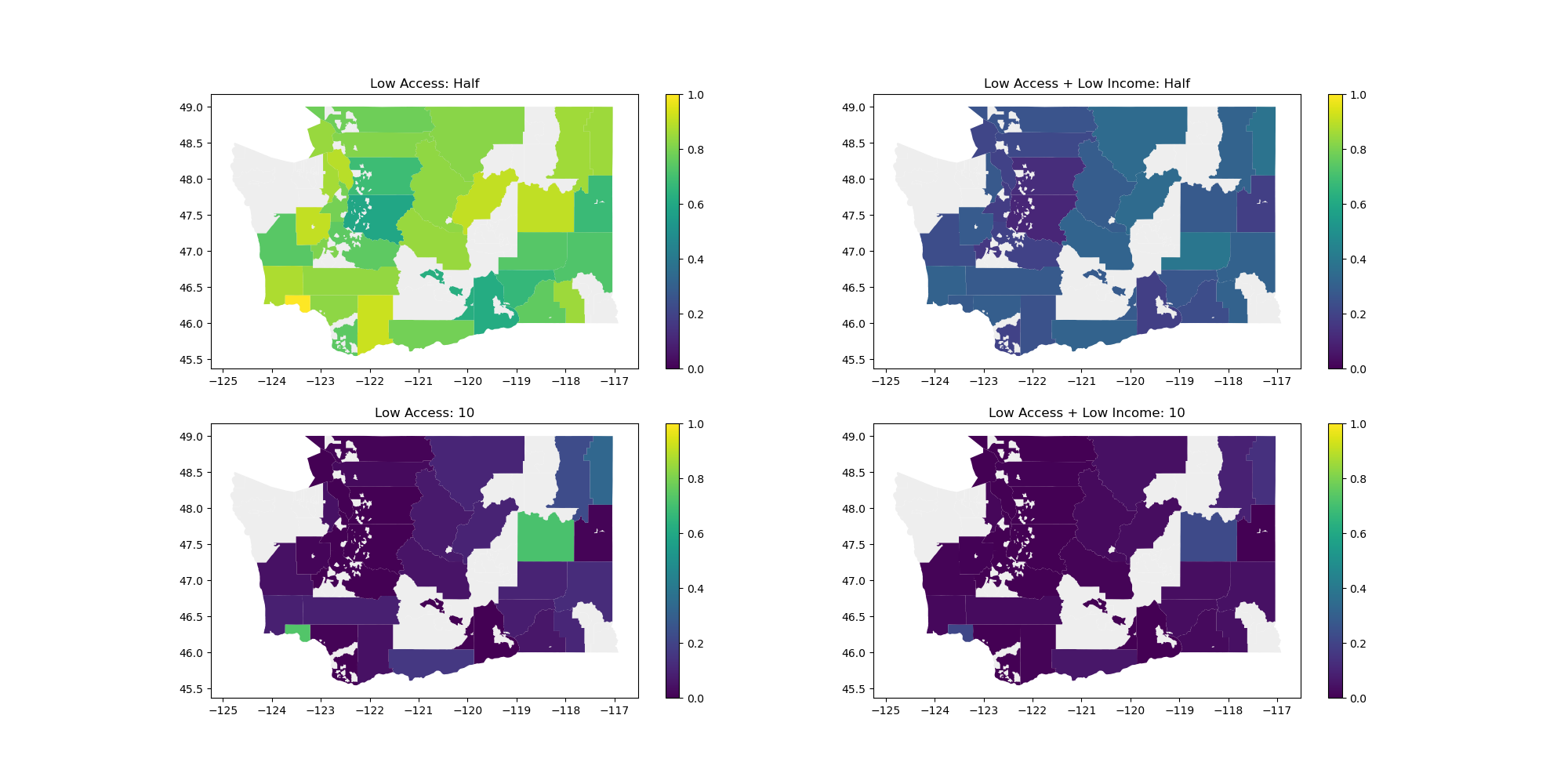 Task: Write a function plot_low_access_tracts that takes the merged data and plots all census tracts considered “low access” in a file low_access.png.

For this problem, you should not use the LATracts_half or LATracts10 columns in the GeoDataFrame. The intent of this problem is to have you practice the computation necessary to recreate those values. Note that the procedure described below won’t compute the exact same values, which is intended.

First, compute the above statistics for each census tract depending on its classification as Urban or Rural. Don’t use the LATracts_half or LATracts10 columns in the GeoDataFrame since this computation is slightly more subtle. The thresholds for urban tracts are considered differently from rural tracts.

Then, produce a layered plot (all on the same axes) to highlight low access census tracts. Each plot will draw on top of the previous plot.

Give it a title of “Low Access Census Tracts” with plt.title(). 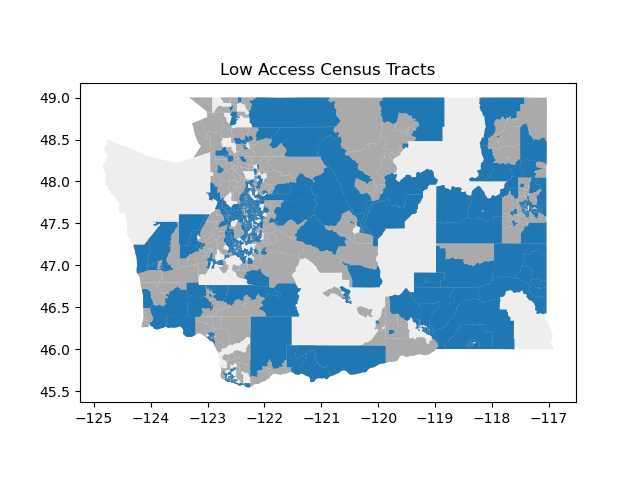 Task: In hw5-writeup.md, apply critical thinking to address the following questions about data collection and analysis. You could spend an entire course talking about any of these topics, but we’re just looking for 2 to 4 sentences on each question.

What is one way that government officials could use plot_food_access_by_county or plot_low_access_tracts to shape public policy on how to improve food access?

What is a limitation or concern with using the plots in this way?

Submit your work by pressing the Mark button. Submit as often as you want until the deadline for the initial submission. Note that we will only grade your most recent submission. You can view your past submissions using the “Submissions” button.

Please make sure you are familiar with the resources and policies outlined in the syllabus and the take-home assessments page.